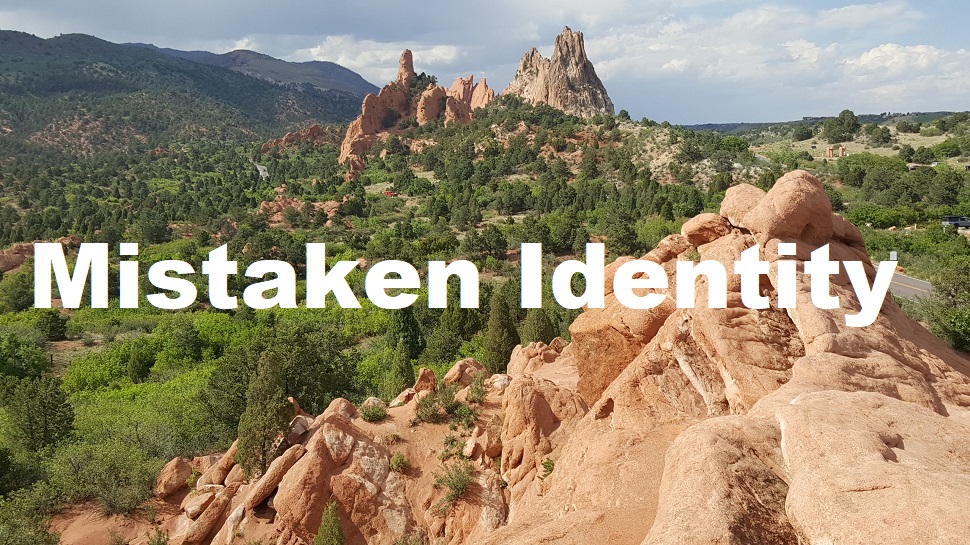 “When Jesus came into the coasts of Caesarea Philippi, he asked his disciples, saying, Whom do men say that I the Son of man am?

And they said, Some say that thou art John the Baptist: some, Elias; and others, Jeremias, or one of the prophets.

He saith unto them, But whom say ye that I am?

This year, my family and I were blessed to take our first family vacation to scenic Colorado. We were thrilled with the views from Royal Gorge, the history of the Cave of the Winds, and the sights from the top of Pike’s Peak. We strolled through the ‘Garden of the Gods’, impressed with the power and creativity of Almighty God.

While in the ‘Garden of the Gods’ we hiked around the ‘Tower of Babel,’ a stately, twin-peaked rock formation that pierced into the heavens as its Biblical predecessor must have done.

People from all over the country were hiking up and down the paths, taking photographs with their friends and family, and updating their ‘profile pic’ on their social media. There were exclamations of “O my God” as folks marveled at the stones, and plenty more “OMG’s” on text messages and posts. It moved me to hear so many swear to a God they knew nothing of.

I believe I felt a little of what Paul did when he saw the Athenians worshipping at the altar “TO THE UNKNOWN GOD” (Acts 17:23). The Holy Spirit stung my conscience as I heard the blasphemy of so many people looking for a God that I knew personally. As Paul said, “Whom therefore ye ignorantly worship, him declare I unto you.” Well, I did the only thing a Christian could do under such conviction: I preached the gospel! Yes, I can truly say that I myself preached at the base of the ‘Tower of Babel’.

When Christ came into the world, his purpose was to manifest the one true LORD God who had been concealed until then. There should have been no doubt among the disciples as to His generation, yet there it was.  Two millennia removed from His first advent have done even more damage to the knowledge of His Good Name.

After we left Colorado I was contacted by my bank about several purchases made as we travelled across the country. I felt pretty confident  about where and how we spent our vacation funds, but I complied with the interview. The banker took extra care to verify that I was who I said I was. In my mind, I thought, “How could she not know me? I mean, IT’S ME after all!” It was just then that she revealed the true reason for her call: someone had stolen my credit card info (presumably with a gas pump skimmer) and was having a good time in Deland, Florida!

The audacity of someone who could dare pretend to be me! How could they lie like that? Had they no conscience? I’ve never visited, or even driven through Deland, Florida- surely they can’t believe that was me! Thoughts like this ran through my head until the banker’s voice brought me back to focus on the problem at hand, proving who I am, where I was, and when I was there.

Isn’t it strange how upset we get when someone steals our identity, compared to how calmly we respond to the misrepresentation of our King? The problem is not “How could they not know who I am?” but should rather be, “How can they not know who HE is?”

My identity is worthless in comparison to His. My assets are pitiful in relation to his resources. My name might bring recognition, but His Name brings salvation. My name may be loved by some, but at the name of Jesus, “every knee should bow, of things in heaven, and things in earth, and things under the earth; and that every tongue should confess that Jesus Christ is Lord, to the glory of God the Father.” Philippians 2:10-11

It is a question worth asking: whom do you say that the Lord Jesus Christ is?